Having already cycled all the paved roads of the island, I take a slow pace today to unpack and repack, do a bit of laundry then head south.

In just a week, I seem to have accumulated a lot of food. Enough for a few hundred kilometers. 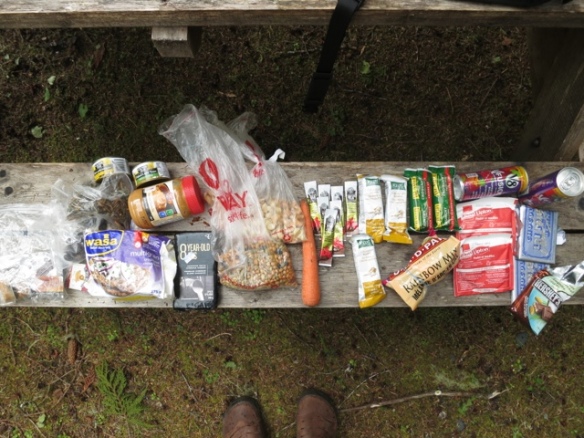 A few unusual things include Labrador tea given to me from a barber and amateur ethnobotanist. A few chocolate covered coffee beans from Becky, which I will save when I need the energy and a round of nearly pure cacao from Mexico for the same purpose.

As promised, I pedal around Masset and Old Masset to photograph the signs of protest. These appeals against the planned pipeline and the tankers that would come with it are clearly done by many different people. This is not like forwarding an email or mailing a form letter someone else wrote. You can see the creative hands at work. 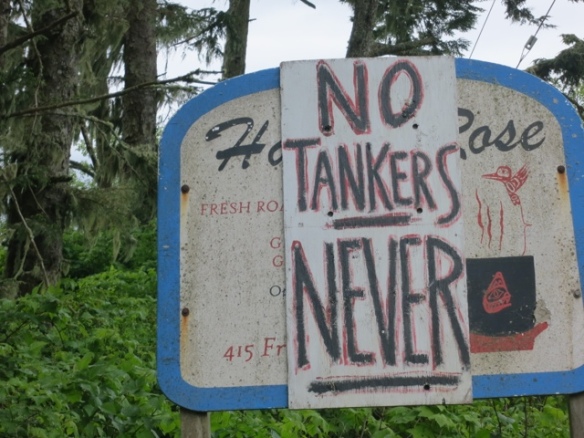 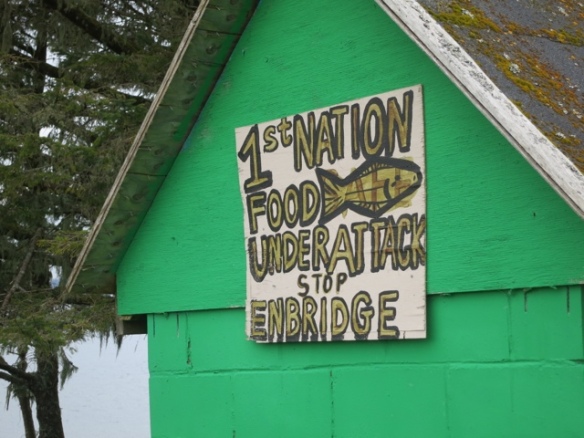 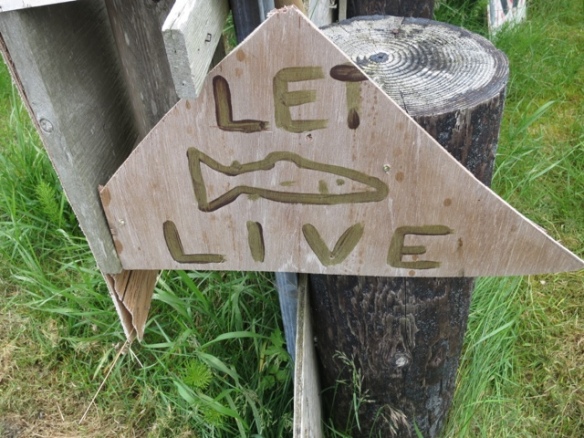 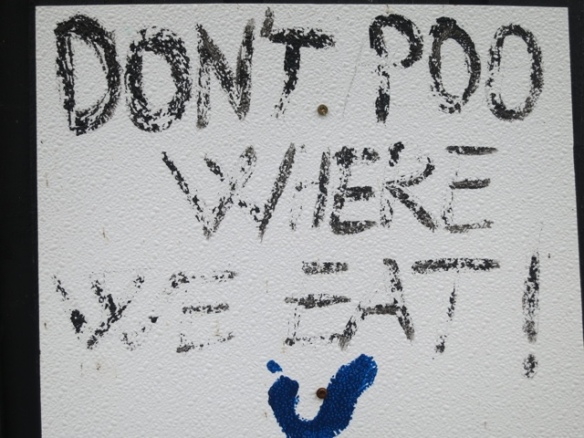 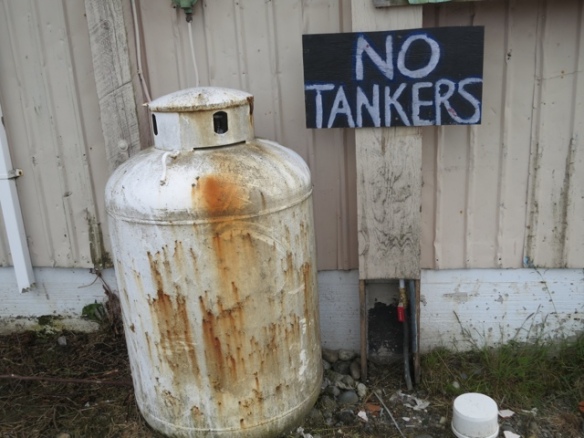 The return trip to Port Clements, halfway between Masset and Skidegate, is blissful bicycling. Early evening light, no cars and a tailwind. Cyclists coming from other parts of Canada should be aware that the road shoulders on Haida Gwai look firm but they are deep sand. A strong wind gust pushed my front tire in and it immediately sank and I barely recovered. My wider tires, Schwalbe Marathon Supremes 42mm saved me.

The early evening light is so vivid. 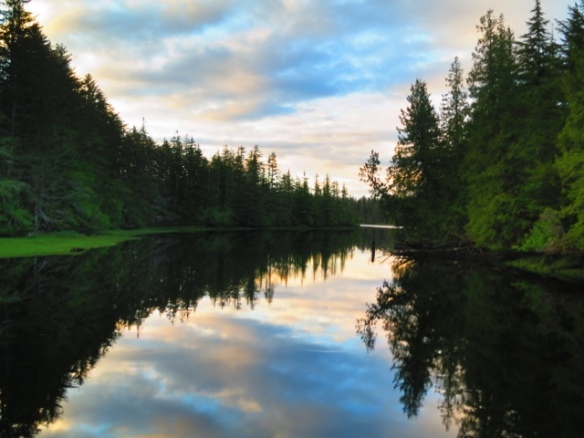 And back at the dock, to be named Rainbow Pier, in Port Clements as the sun goes down.

My little experience in Port Clements is one of those moments that make you feel good all over. Not because of anything I accomplished but because of plain human kindness. Why? I arrived very late into Port Clements even by my standards – the ride down from Old Masset was too beautiful at dusk to take quickly and I got caught up in taking lots of photographs. Before leaving Masset, I bought the best steak the Co-op had for sale with the plan of cooking it over an open fire at a campsite in Port Clements. Getting into Port Clements approaching 10pm with fading light and seeing that the campground was another 4km past the town, I knew it would be cheese and crackers for dinner.

But what to do with the steak? Actually two of them as that is how they were sold. There was one thing open in Port Clements, the Yacoun River Inn, but there were no cars in the parking lot but there was a neon light glowing that said “Open”. Upon entering, I am greeted by about five people, each one knew exactly where I had been and when as apparently they had been passing me on the road for the past two days. I compliment them for the way they pass, moving all the way to the other lane. They reveal that it is because many local cyclists ride drunk and so drivers never want to get close to a cyclist.

I ask if they are serving any food. The bartender, Lynn, tells me everything has long been closed up in the kitchen. I then ask around if anyone wants two steaks to take home as I fear the meat would go bad overnight. A woman at the bar, Chloe, tells me to go get the steak. I come back and she has opened the kitchen. After being critical of the choice of meat, a cheap, tough cut, she takes it, goes into the kitchen and pounds away at it to make it more tender. About 30 minutes later she comes out with two perfectly cooked steaks, a pile of penne pasta and buttered carrots. Turns out she was once a cook at the Inn. A cook, she points out, not a chef. She says chefs can’t cook. 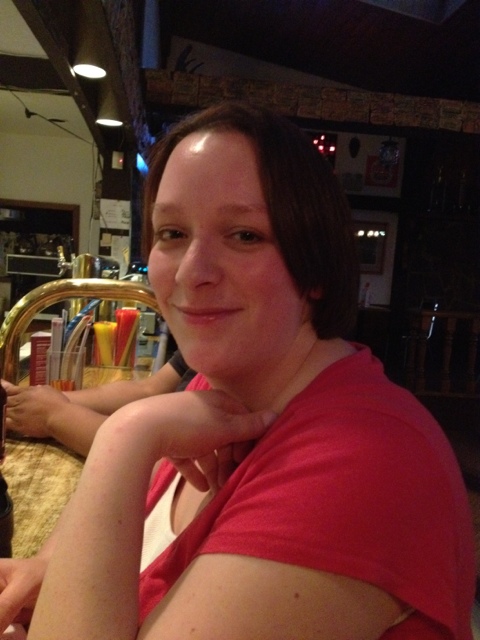 Through all of this I got to know a few of the proud Port Clements locals, although all originally from elsewhere. They love raising their children in the town, where they know neighbors will take care of them, just like they did for me. If you want to live here, Jesse, a tree planter at the bar, says he has earned over $1 million in the past eleven years. The local historian, Jack, tells me that back in the 1940s and 1950s everyone was a racist. The people of Masset hated and fought the people from Skidegate, Canadians hated the Japanese and so on. He said people just didn’t know any better. Things are changing.

Eventually, approaching midnight I make my way to the local campground. And this is what is looks like in the morning. Another campsite where I was the only person there. With temperatures still in the single digits at night, I guess I understand.