Before leaving Prince George I go to a local bike shop, Evolve, to have my chain checked again and also to grease my Frog Speedplay pedals. Turns out they had the special grease gun for the job. And they confirmed that after just 1,500 km, my chain was stretched past 75% so I had it replaced. I love the smooth feeling of a new chain and fully greased pedals.

I then cross the Fraser River leaving the city.

On the other side of the bridge I meet a cyclist road sweeping angel. His name is Dale and, with his free time, he wanders about Prince George with a big broom sweeping areas that have become too full of debris for cyclists. We have a fun conversation and he invites me back to the city for lunch but it was already near noon and I needed to make good progress.

At the top of the first climb out of Prince George there is a modern building that looks part of a new college campus. Regrettably, it is a shiny example of where Canada is investing lots of money. A prison. Politely called an institution. I don’t think I have seen a school this nicely built in Canada yet.

I soon get excited with the 200 km plus ahead with nothing but wildlife in between. The signs on the road are like advertising. 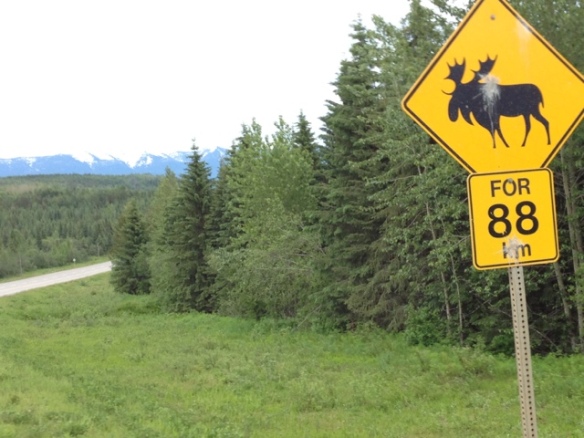 The day is mostly overcast with a slight headwind. A few long climbs. 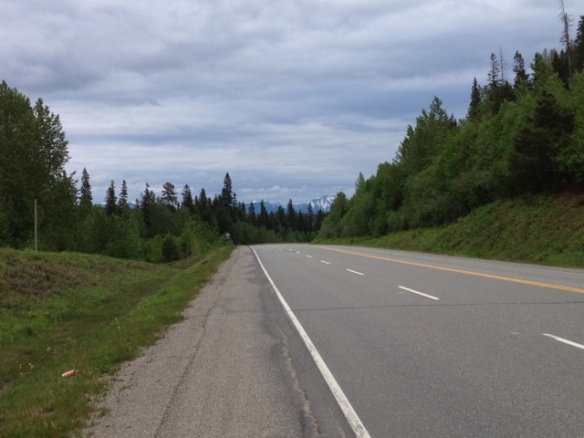 My goal for the day is the Grizzly Den Provincial Park 95 km away.

I see plenty of signs of Black Bears as I can see, as my grandmother would say, they have done their business on the Yellowhead Highway. Number two business in fact. No evidence they are eating humans.

I reach the Grizzly Den Provincial Park but note that there are three dirt paths leading to trailheads but no sign of a campground or campsite. So much for the plan to stay there for the evening.

I pedal on and start looking for a place on the side of the road. The kilometers continue and I do not find anything. It’s true what a cyclist told me a few towns back: “There ain’t Jack between Prince George and McBride.” When I finally find what looks like a grassy area, I walk my bike in and see a sign that reads: “Caution: Bear Sanctuary Area.”

I didn’t even remember to take a photo. I knew unwanted to be some kilometers from there. As I pedaled on, I saw four Black Bears on the roadside. As soon as they heard the click of the freewheel, they would run into the woods. That is the good news. What was amazing to see was how fast and elegantly they ran. I just barely managed to get one photograph.

Having seen so many bears in the last ten kilometers, I stash all my food in the back of the bear-proof trash bins. I learned this trick earlier in the trip, you just have to get it before the trash collector comes in the morning. 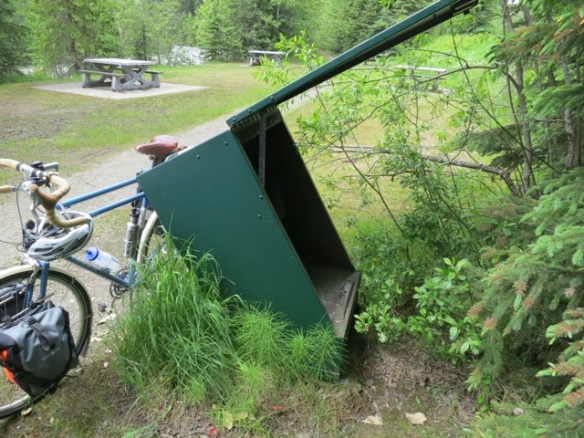