I awake in the Caledonian Sleeper the same way I went to sleep, to the sound of a child playing a hand held video game in the sleeping compartment contiguous to mine. Even though I ended up with a sleeper compartment all to myself, the obnoxious sounds from his game was like having a companion in my ear. The boy was traveling with his mom. The device seemed to replace conversation between the two of them. Oh well, I have a country to explore.

I manage to get on the first train to Thurso from Inverness even though I do not have a bicycle reservation. I play the dumb tourist and the conductor allows me to add a third bike to the storage area meant for two.

People are walking about the streets of Inverness with winter coats, hats and some with gloves and scarfs on. Oh oh, I have come north again. But it is sunny. They are braced as much against the wind as the chilly air.

I find a place for coffee and something that it looks like Scottish people eat for breakfast.

On the train to Thurso, I meet three other cyclists who are planning an end-to-end trip. I am loaned a book written about doing the trip following back roads from Lands End to John O Groats. I quickly read it (backwards) and immediately change my plans. The description of the route, mostly on B roads and sometimes even smaller, sounds compelling. I had originally planned on starting down the east coast, following mainly A roads. No more. The book describes parts of the route as the best cycling in northern Europe.

So instead of Thurso by train, I head to Wick. From Wick, I go north to John O Groats and then west to Thurso but by bicycle. The train schedule is such that I do not start cycling until 3 pm.

As soon as I am out of the town of Wick, the scenery is stunning and panoramic. And the wind is howling from the west. 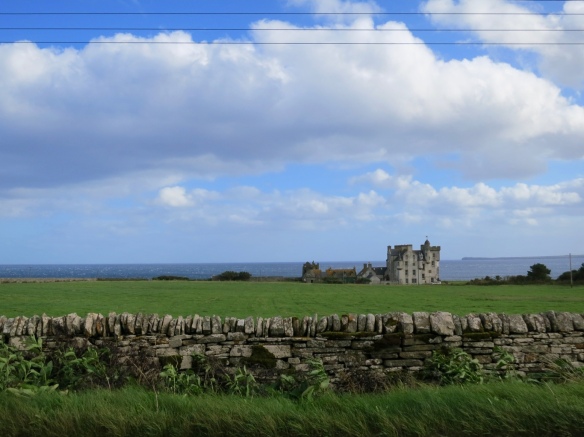 The wind broadsides me all the way to the top of the Scottish mainland, John O Groats.

Note that the sign is missing at the top of the post. Apparently it is stolen as soon as a new one is put up.

I experience my first accident. Upon stopping in the wind, the bike gets blown over so quickly, I cannot get my foot out of the pedal cleat so over I go with the bike on top of me. As usual, more embarrassing than serious but the shift lever punctures my thigh. Probably the best place in my body to be punctured as there is a lot of muscle there to penetrate. Note to self: design a rubber shift lever cover. Probably best not to upload photo of the wound but email me if you’re interested.

When I head west from John O Groats the wind is fierce and in my face. Even though it is the strongest wind of the trip so far, I am so fresh and psychologically prepared for it, I take its full force with a sense of humour. Bring it on.

I follow a tiny road, more like a paved pathway, most of the way to Thurso, the National Cycle Network 1, NCN1. A pleasure.

There are more sheep than cars up here. By far. 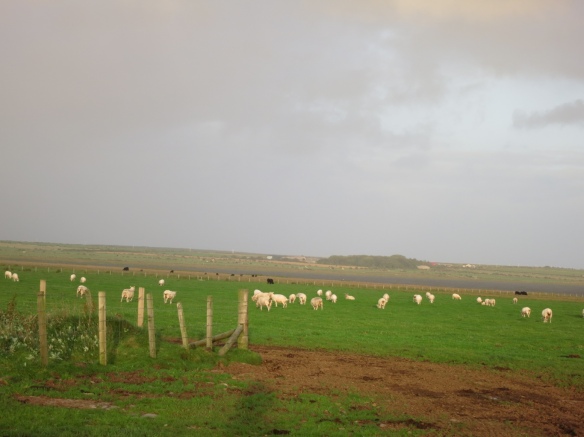 And beautiful views of the rugged north Atlantic. The ocean is full of white horses a man by the shore tells me. Horses, I ask? Those white curly waves, aye, he says.

Fun to be on the road again with such a simple life living out of two small panniers.

13 thoughts on “Blown Away”