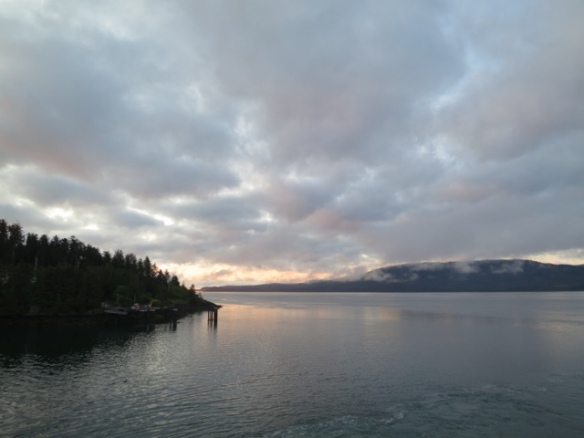 A very early beginning in Skidegate with the ferry landing before sunrise at 6am. It was wonderful to be greeted by a recent Pearson alum who is studying and working in Haida Gwai, Rachel, PC Year 35.

Cycled out to Queen Charlotte to Queen Bee’s Cafe and enjoyed the recommend waffles.

And also lovely to be greeted by a bald eagle too. 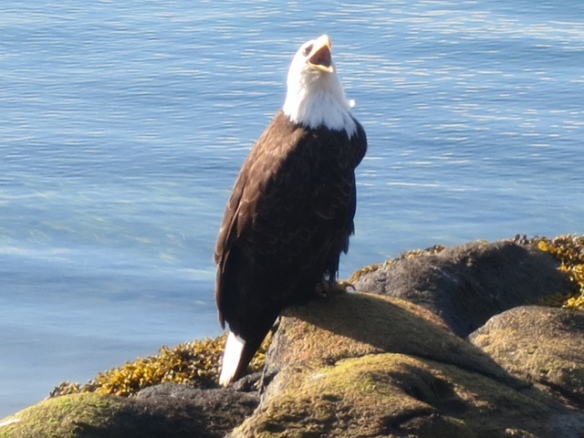 It is amazing what this little Canon S100 can do compared to the massive Nikon camera I lugged across Canada in 1977 could do.

I cycle back towards Skidegate for a tour and visit to the Haida Gwai museum. Great stories captured in the totem pole carvings. The overall history captured in the museum is fundamentally depressing, from the first contact made claiming the islands for Spain to the introduction of small pox, which killed all but 600 out of a population of over 30,000 to video images of children being taken away on steamboats to residential schools to be abused and the furtive efforts to preserve language that may disappear when a small number of elders die. 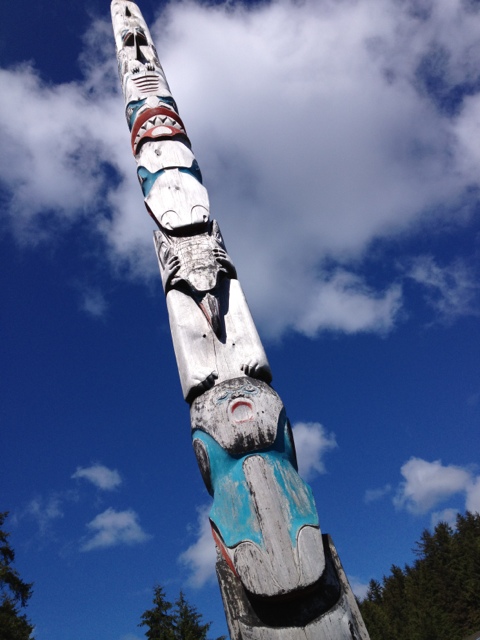 And when one leaves the museum and passes through the little harbour in Skidegate empty now of all the traditions and dwellings just seen in photographs at the museum it is enough to make you cry. A cry of sadness. A cry of shame.

The sun and shoreline help with the pedal north to the top of the island. Nowhere have motorists been more considerate. There are few of them but they pass slowly and only after they have moved completely into the other lane.

I clamber out on this little bluff for lunch.

A more traditional on-the-road lunch today. Peanut butter and bananas have powered many across the continent before.

The ride from Skidegate to Tlell is the best 40 km of the trip so far.

From Tlell the road goes inland and cuts through Port Clement, home to the famous Golden Spruce made famous by the book of the same name. Even fewer cars in the road from Port Clements to Masset. Again, I time the final leg of about 45 km with Canadian dinner time and indeed have the road to myself.

Not sure where this pier in Port Clements leads to. 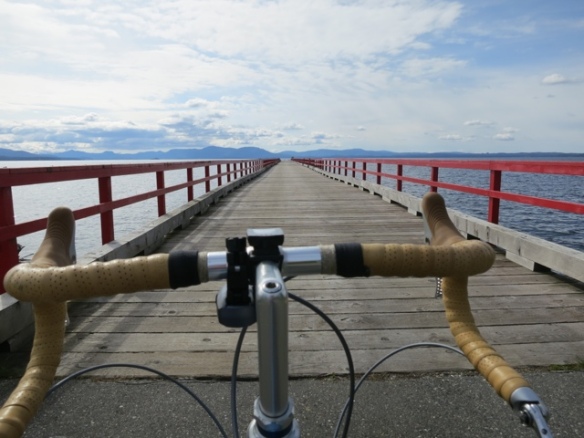 When I make it to Masset, the chill off the ocean is deep into my bones. The town of Masset is a disturbing one. The heart of the town is an abandoned army barrack. It sits like a pox on the people of the town. Given the history of how the government has treated the people of these islands, leaving this monstrosity behind is a further insult. I am told it is full of asbestos but it should be removed at any cost. It spreads bad feng shui all over town. And the town itself is in shambles. There are three buildings that are not in shambles: The Court House, The RCMP Station and The BC Liquor Store. Enough said.

As I make plans to camp for the evening, I visit the local grocer, open until 11pm. There are a few pieces of fresh fruit in the store and I buy them bruises and all. As I pack them into my panniers and see the masses of obese parents and children come and go, all leaving with their preferred sugar drinks and bags of snacks, I wonder if they make the connection. Of course, everyone has a choice and I respect that, but children? Maybe labeling aimed at kids is needed. Almost everything on sale is part of a pre-diabetic diet but do they know that?

There are labels all over town of another sort, a danger, based on these signs, that many are concerned about. No one seems to want the oil tankers that would result from the Enbridge oil pipeline that may be built across BC to the coast. It is too dark to photograph them but maybe the next day.